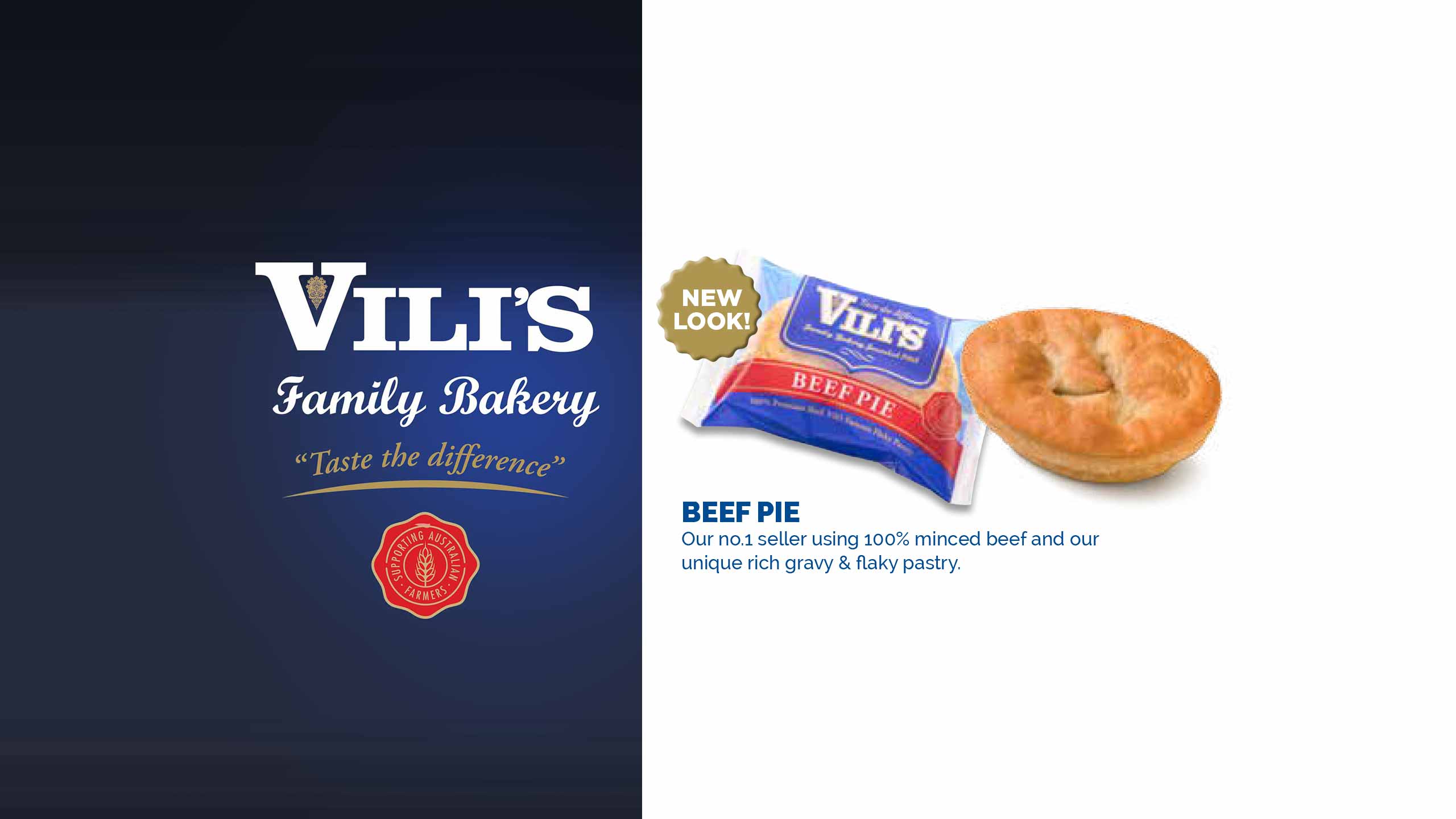 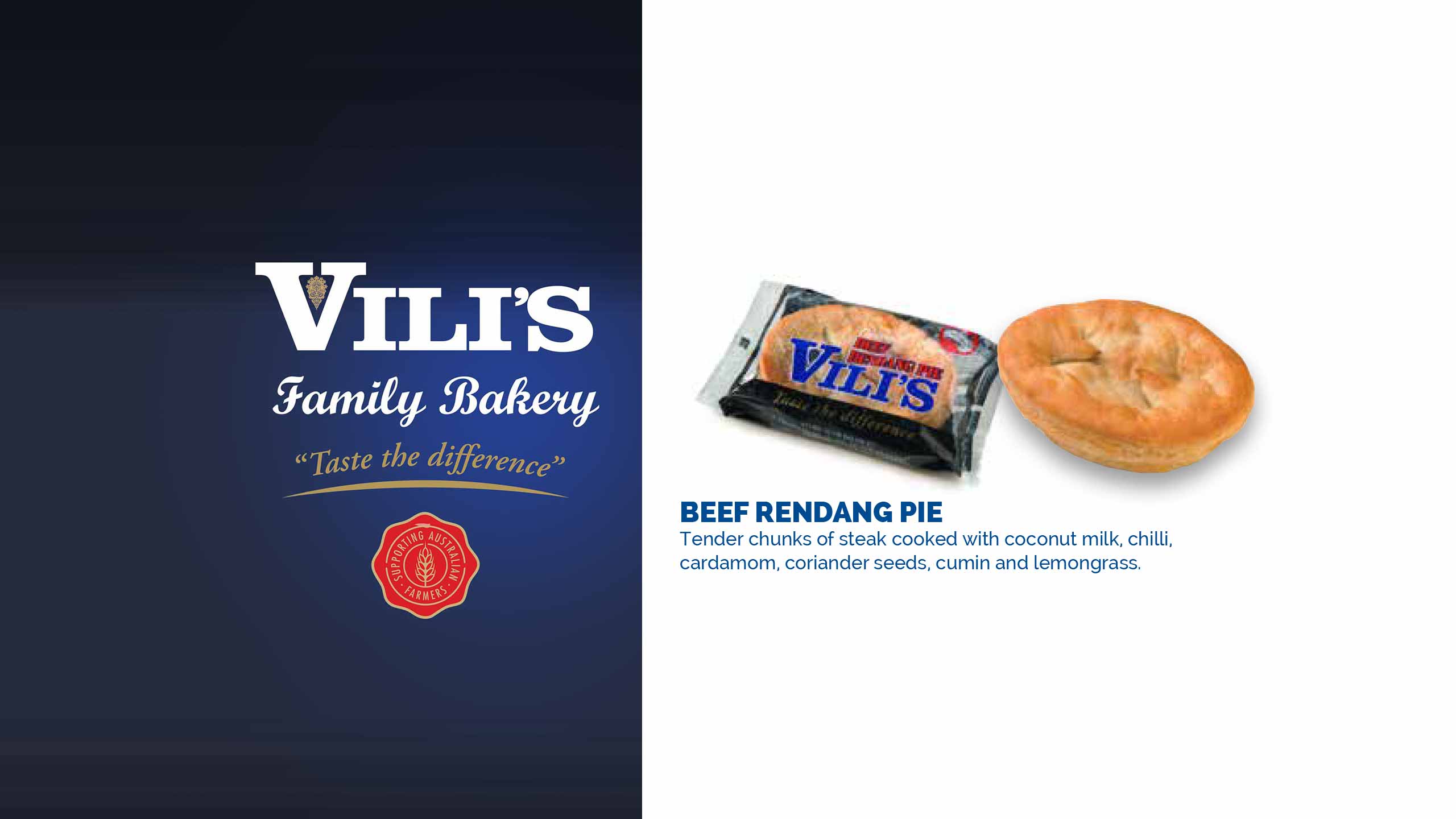 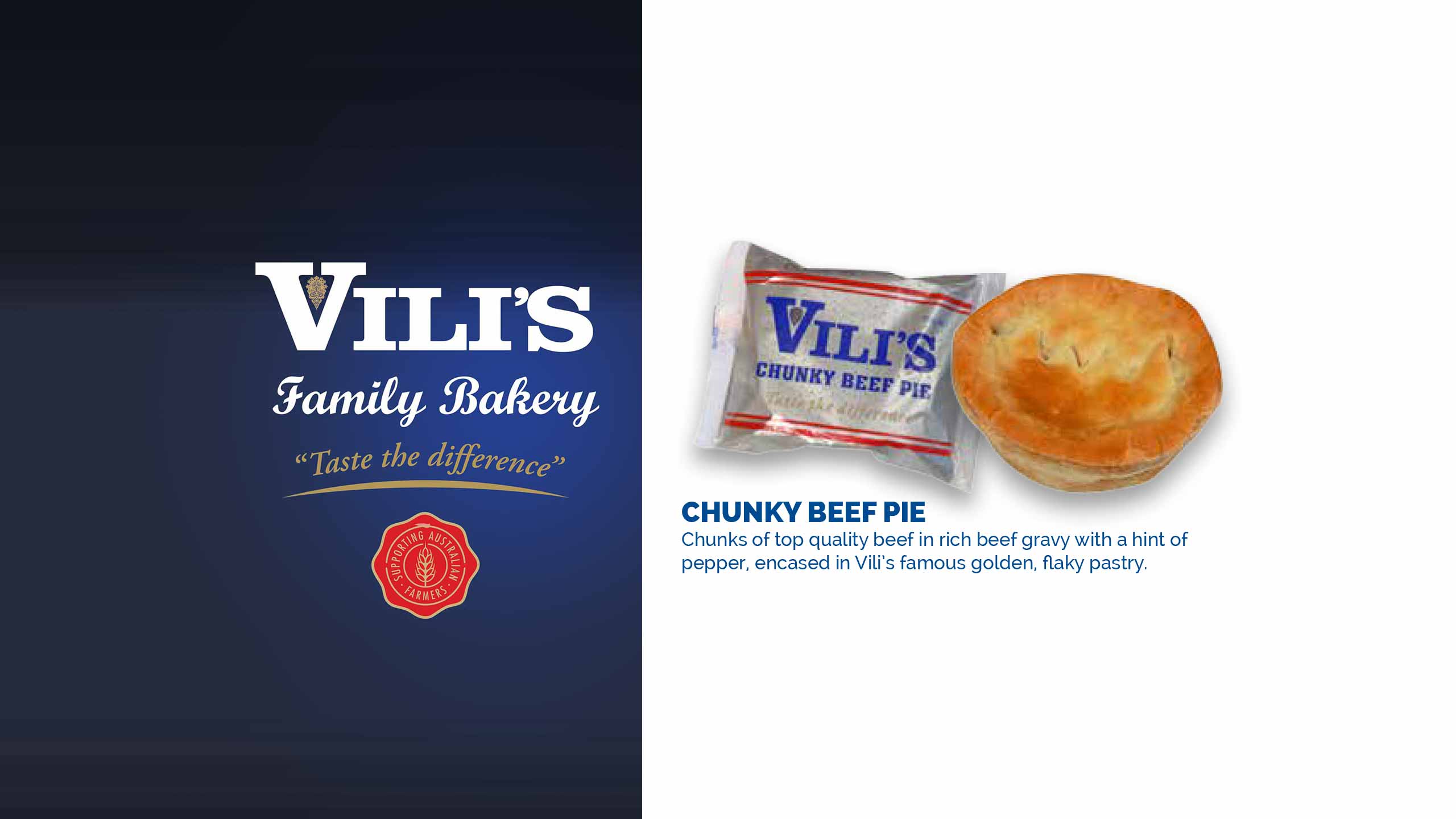 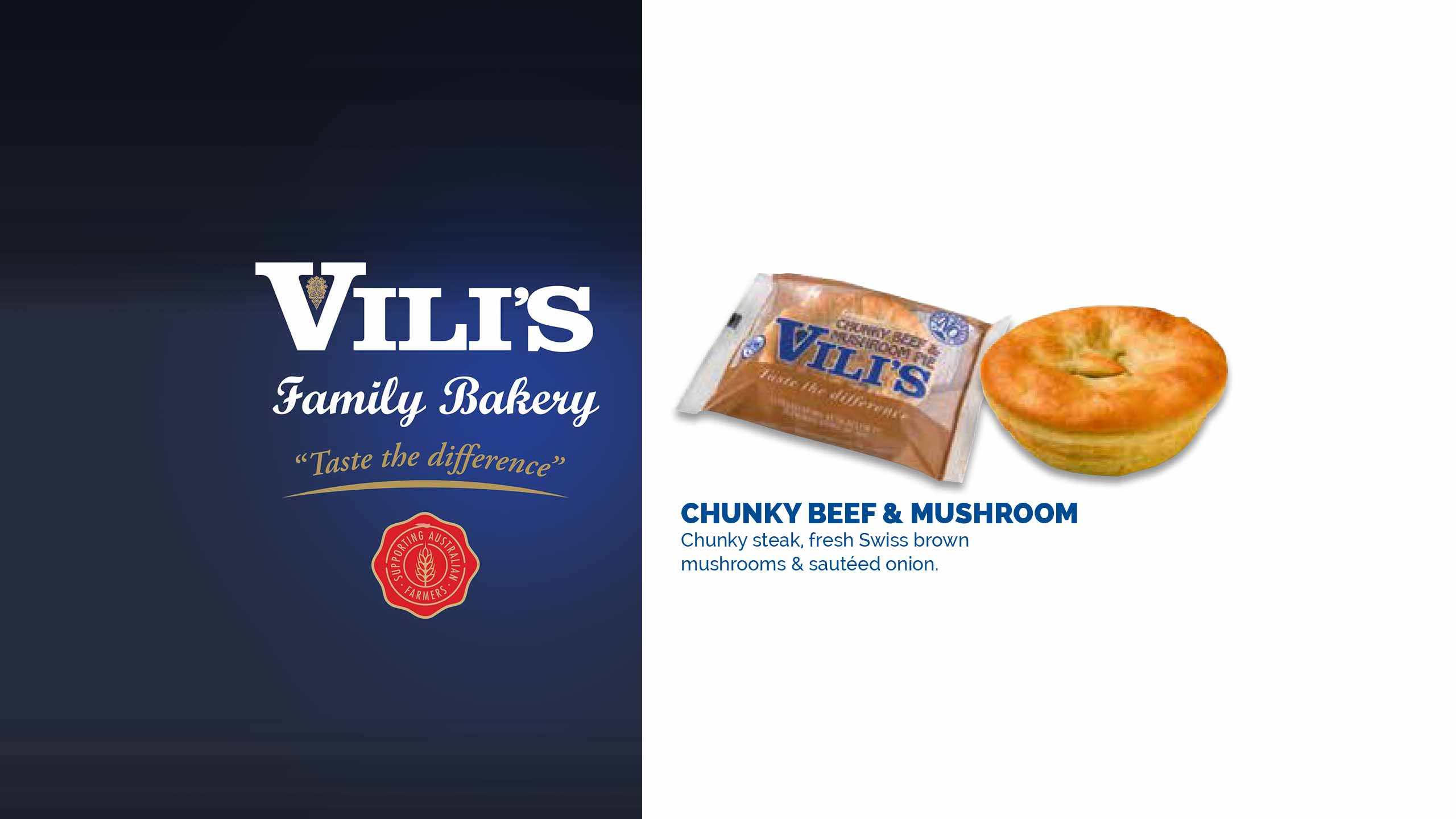 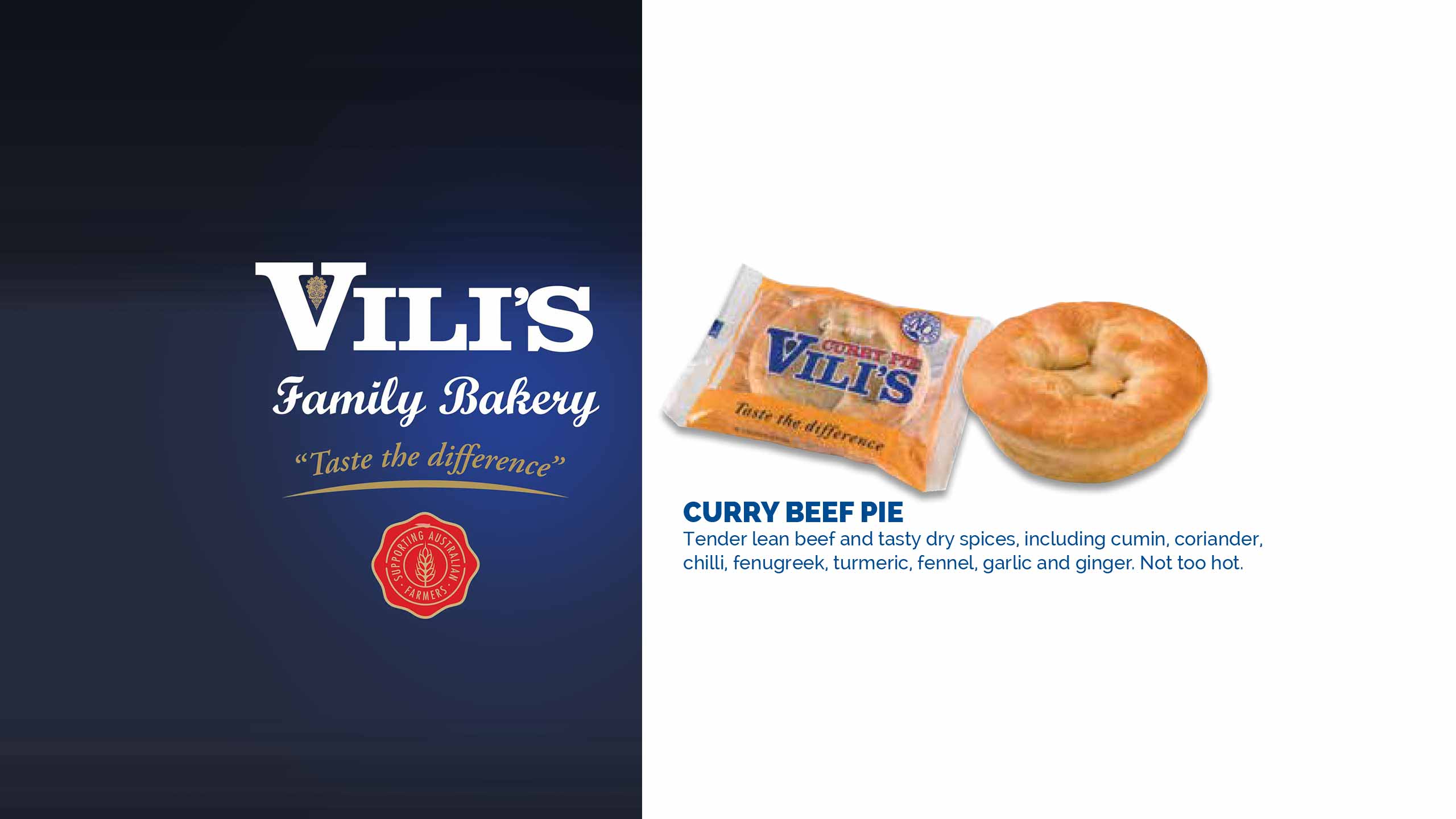 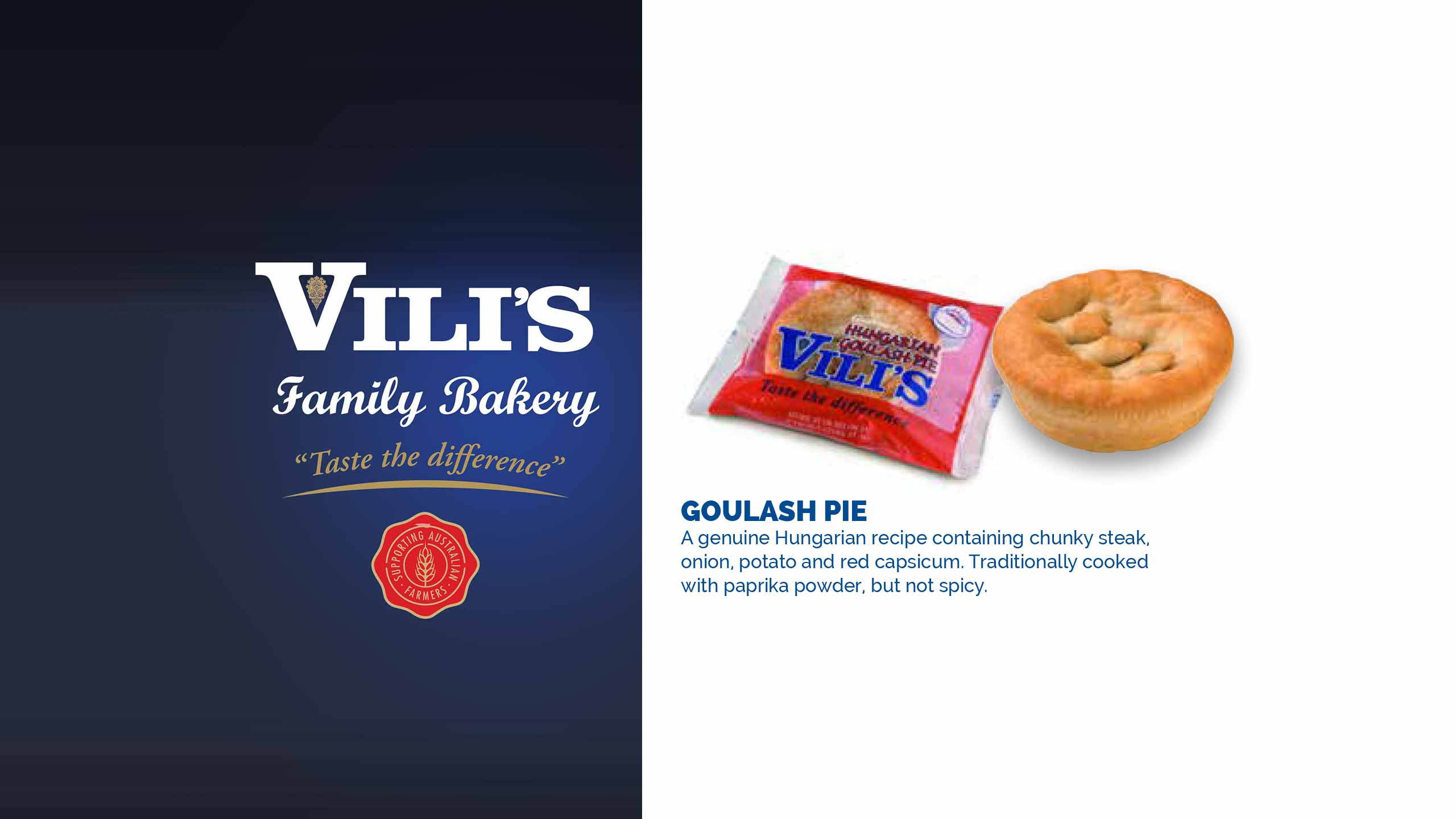 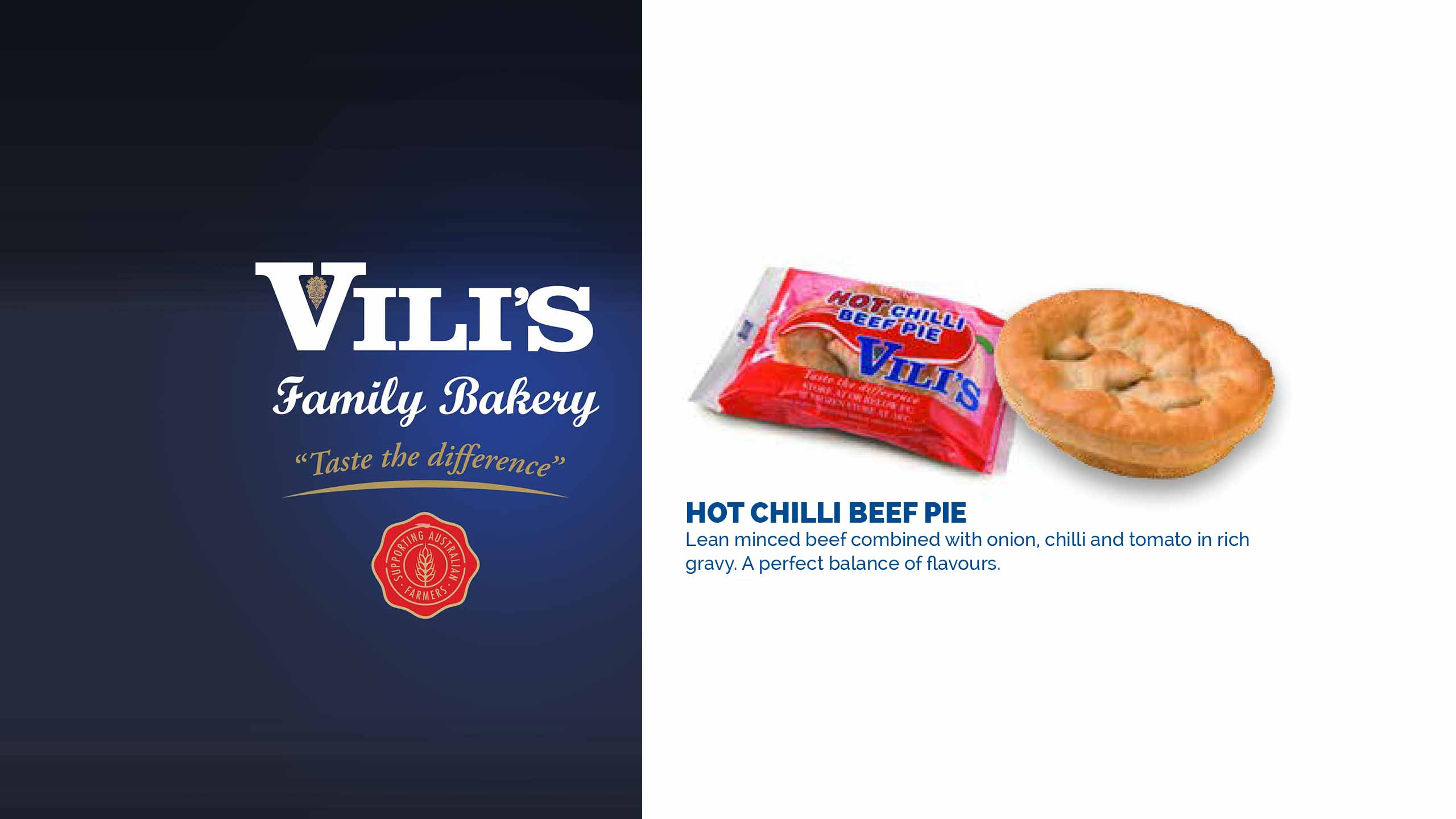 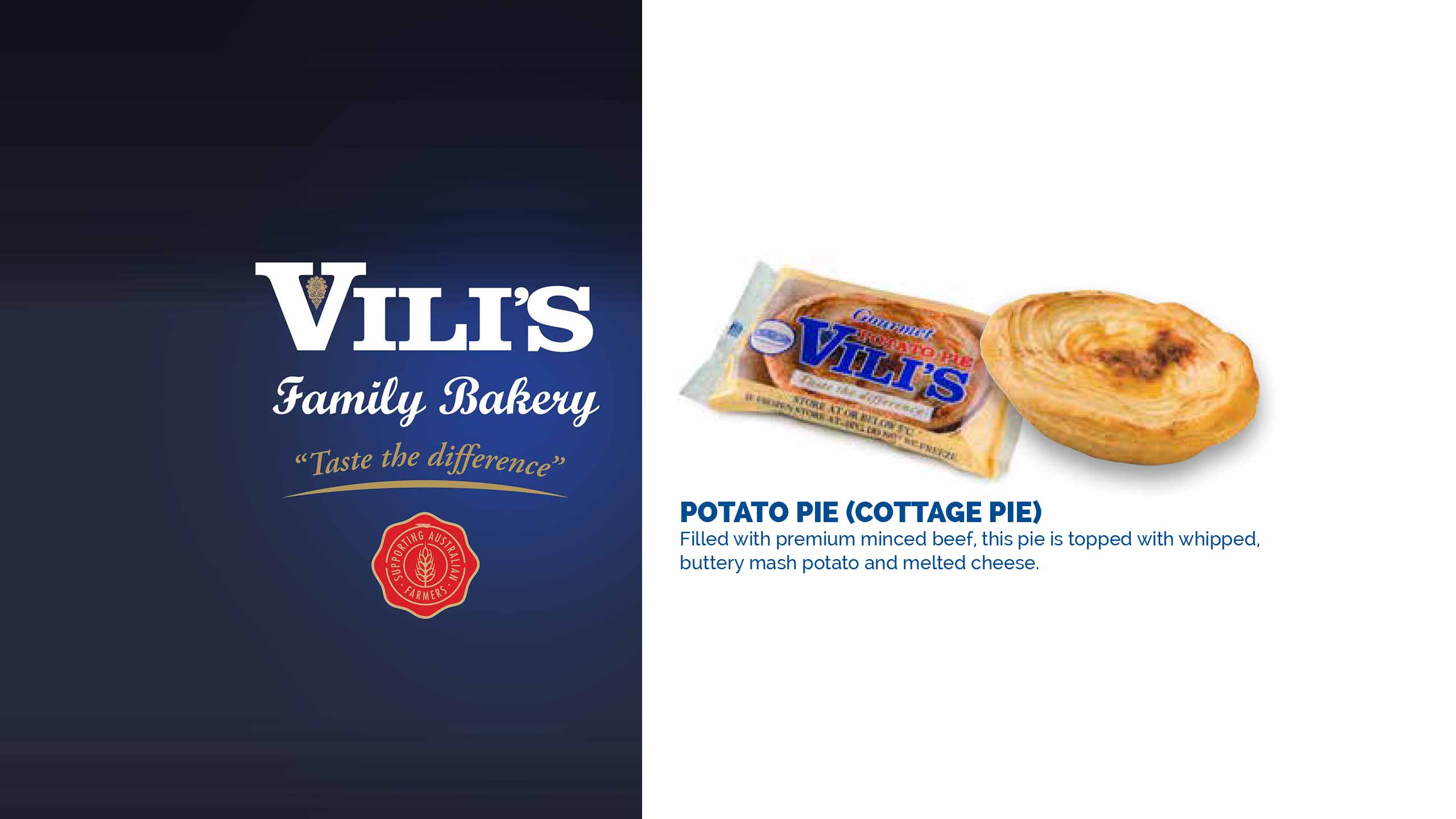 Vili’s Family Bakery creates and bakes every day. We have distributed our food throughout Australia and globally to 24 countries in Asia, Europe and the Pacific.

No added preservatives. When we say hand made we mean hand made.

The humble Aussie meat pie was transformed when Vili started his baking revolution and stated that “a meat pie should only contain meat”. Don’t all meat pies contain meat only? Not so! Many pies contain soy bean substitutes and artificial colours and preservatives that give the indication of high quality meat.

Vili’s Pies do not just have any meat, but high quality lean beef.

“It must be fresh” became another Vili's philosophy, so he used real onions and rich beef gravy. Vili’s pies contain around half the fat of your average meat pie because they have only quality lean meat. Not only are they lower in fat, they are higher in real meat flavour and lower in salt than the competition.

The revolution continued and Vili perfected his now legendary flaky pastry, much lighter than normal pie casings, but strong enough to hold the meat filling without spilling.

Then came the Vili’s Pasty. The same golden, flaky pastry and full of fresh vegetables.

Every Vili’s pie, pasty and sausage roll is handmade. Vegetables are peeled by hand, spices are added by hand and anything that doesn’t match Vili’s high standards is rejected by hand. As Vili says, “machines can’t taste”, but humans know the difference and can give the thumbs up to a great pie.

For our full range please download our product brochure.

Check out more from Vili's

The Vili’s story of success from humble beginnings to an iconic South Australian business is one that tugs on the heart strings.

Catering | Enjoy One of Vili's Platters at Your Next Event

Our catering platters for events around Adelaide suit any function, big or small, corporate functions or birthdays. Choose from sweet and savoury, meat, vegan and vegetarian.

Where to Buy | Local & Global Distributors

Vili's Bakery has expanded beyond Australia and is now supplying quality bakery products world wide to Asia, Europe and the Pacific.

Breakfast all day, fully licensed, take away or dine in, Vilis café is an Adelaide icon that serves hundreds of people daily. Pop in and dine with us, we are open 24x7!

Vili’s Mega Vans are ideal for large scale events where you need to serve many people with minimal fuss. Available in Sydney, Gold Coast and Adelaide with minimum order requirements.

Vili’s prides itself on maintaining the highest standards in producing quality foods and ensuring our certifications are always up to date.

Address: 2-14 Manchester Street, Mile End South, South Australia, 5031
Call us on the telephone or send a message using the form below.